Untitled (To Describe You)

Born to a German mother and a father from Sierra Leone, Manchester's Tibyan Mahawah Sanoh has always been acutely aware of the interplay between ancestry and identity. Her work as a visual artist, poet and filmmaker reflects the interiority and exteriority of her family relationships, and she only casts collaborators she's developed a bond with, whether she's shooting at home in Manchester or further afield in Ghana. Space Afrika (Joshua Inyang and Joshua Tarelle) are a Manchester-based duo who channel the industrial architecture of Northwest England into their minimalist patchworks of rhythm, texture and sensation. Last year, they released their most charged project to date, 'hybtwibt?', a celebrated half-hour audio collage that emerged in the wake of Black Lives Matter protests across the world. Their collaboration with Sanoh comes in the form of a film, with her imagery and Space Afrika’s soundtrack in conversation with one another, painting a vivid portrait of the stories and voices highlighted throughout it. Building on their work together in this piece, Space Afrika follow the trajectories of black British culture in modern Britain. 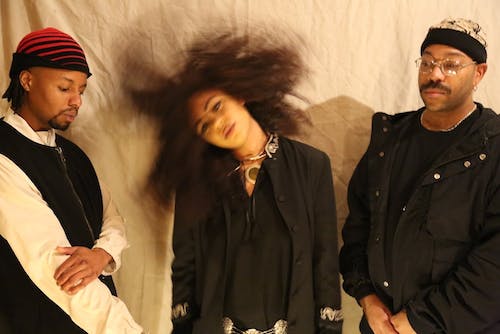