The renowned Japanese-born and Paris-based visual and sound artist is mostly known for his compositions in the field of experimental electronic music and computer art. Groundbreaking works like +/-, Dataplex and Test Pattern play with the binary nature of 0s and 1s, producing synthetic sounds that are often almost bordering on the edges of human perception.

For this Dutch premiere of a special collaboration with prestigious ensemble The Percussions de Strasbourg, Ryoji Ikeda brings his grid-like approach to music to the realm of analogue and physical instrumentation. Employing ten percussionists in a geometrical set-up consisting of one hundred cymbals, this captivating performance subverts the audience’s expectation of the metallic instrument that’s often used for its rhythmic signposting. Here the cymbal becomes a site of harmonic tension, producing alluring and hypnotic sounds that verge on droning synthesizers. In the proces, 100 cymbals is as much a stage performance as an audiovisual installation, a highly compelling hybrid experience that invites us to rethink the overlap and differences between electronic and analogue music and art.

With the special help of Yamaha and Turkish cymbals 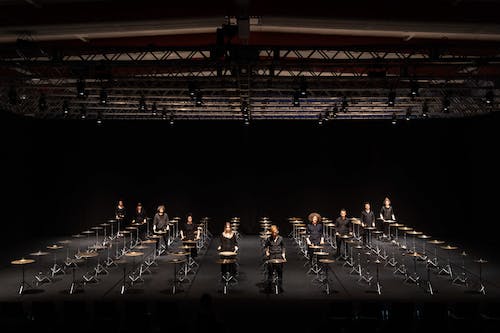