Robert Aiki Aubrey Lowe is a Brooklyn based multidisciplinary artist and composer who's current focus resides in electroacoustic explorations for performance and installation often utilizing the voice and modular synthesis. Lowe has over the years delved deeply into collaboration with the likes of Ariel Kalma, Rose Lazar, Tarek Atoui, Hildur Gudnadottir, Jóhann Jóhannsson, Susie Ibarra, YoshimiO and many others. At Rewire this year, Lowe will be collaborating with New York harpist and electro-acoustic pioneer Zeena Parkins in an online residency. Using one-off DIY electronic instruments and pushing the harp to its limits, Parkins has achieved notoriety for her groundbreaking solo material and her work as Phantom Orchard alongside Ikue Mori. She has collaborated with Björk, Yoko Ono, Jim O'Rourke, Fred Frith, Nels Cline and many more artists throughout the years and is a professor at Oakland's prestigious Mills College.

Parkins had been particularly fascinated with the research and compositions that Lowe had been making using the Harry Bertoia Sonambient sound sculptures  and had recently herself finished a project sampling many of her unique sounds on the acoustic harp . With this as the palette they crafted a new work together, remotely due to the pandemic, but still feeling quite organic. Through sharing conversations and sound files back and forth they were able to create a vocabulary that spoke directly to the intention of producing a work that would echo a three dimensional space as this work will be premiered in the virtual realm.

Lowe conceived and created the visual component exploring almost Calderesque forms by way of analogue video synthesis to reflect the slow shifts in tones and textures of the audio. 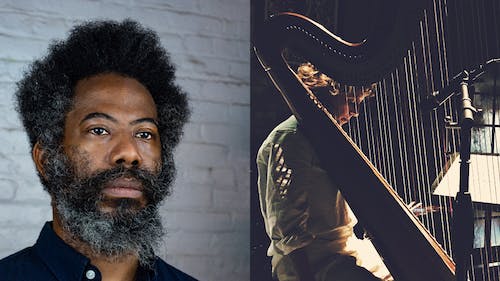