Besides giving a unique twist to club music with the skeletal grime of their formation Raime, musicians Tom Halstead and Joe Andrews also operate under the guise of Moin alongside percussionist Valentina Magaletti, known for projects such as Vanishing Twin, Tomaga, and Lafawandah. Shifting focus from grime’s piercing electronics, Moin is more about adding layers of rhythm, melody, and sound to a form of guitar-driven music. Alternating between clockwork precision and looser improvisation, and combined with traces of electronic music and found audio, Moin is a musical force to be reckoned with, both as a recording band and as a performing act.

While Moin may wear some of their influences – including post-hardcore and post-rock – on their sleeve, the resulting musical output is unlike anything else out there right now. Point in case is their most recent album Paste (2022) which rejuvinates the post-hardcore scene of yore and turns it into a fresh new musical endeavour. Moin harkens back to the times when this kind of adventurous take on rock was a mainstay in the musical landscape, but their work is far from merely nostalgic. Rather, in a contemporary context, their forceful live performances feel like a near-radical injection of sonic adrenaline. 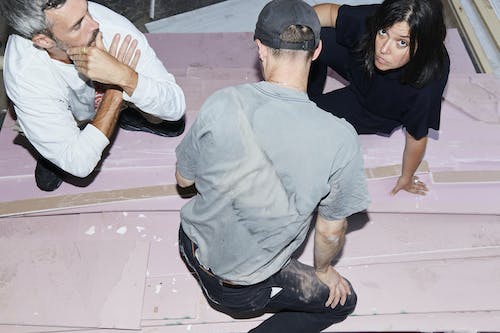