Farida Amadou is one of the most innovative bass players of our era, constructing a uniquely percussive style that employs noise bursts and drones in baffling, unheard of ways. A frequent resident of Cafe OTO – London’s bastion for like-minded experimentalists – she crossed paths with names like Steve Noble and Thurston Moore. Floris Vanhoof might be considered by some as a necromancer of sound and visual art, using old techniques and media to spark wacky innovative ideas. Like an erudite inventor from some bygone era, he builds instruments from scratch that intersperse light, image and sound, repurposing archaic tools to serve his trail- blazing vision. With the two of them holding a residence at Les Ateliers Claus in Brussels, there’s no telling what kind of brain-expanding results have manifested there. Rewire 2021 is without question the right place to find out. 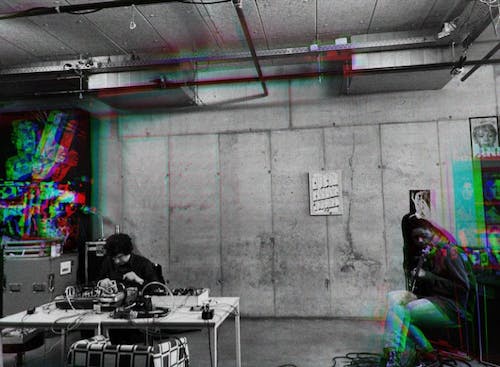