Aurora Halal is a New York-based musician, producer and visual artist. The creator of infamous Brooklyn club series Mutual Dreaming, and co-founder and curator of highly acclaimed music and art festival Sustain Release, Aurora Halal’s unwavering commitment to crude DIY experimentation and live hardware sets have made her one of the most important figures in New York’s underground club scene. Over the course of two EPs ‘Passengers’ and ‘Shapeshifter’, as well as collaborations with Ital and Steve Summers, Aurora Halal has cultivated a signature sound that ranges from hazy, dubby techno to offbeat melodic house with a splash of acid. Her shadowy and psychedelic live sets are built up from layers of analog gear and push her compositions deeper into hypnotic dance floor states. 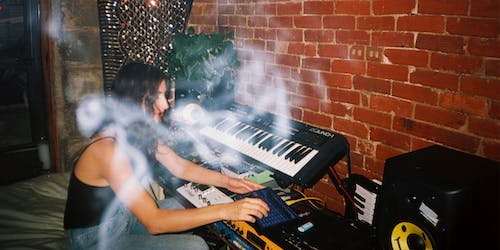